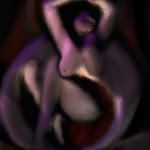 Seems like as I continue to refine my personal definition of spirituality, I see a lot of the patriarchal leanings still exist in organized religions. Its like… the penis is supposed to be the ‘rod of wisdom’.
I’ve got one… and trust me, it isn’t.

Don’t get me wrong, I have more in common with the first two as they’re a closer match to my own philosophy but in the ‘organized part’ – they still have heavy leanings toward the patriarchal (masculine). This mystifies me so many agree that it takes both Yin & Yang (feminine & masculine) to achieve any semblance of balance.

I’d love to see an opening of arms toward the re-emerging goddess (feminine) energy so that it comes into our conscious as a gradual integration rater than having to reach the strength of a tsunami to create change. Either way will effect the needed change but the turbulence of a such wave can be rough on those who are unprepared.

So awakening goddesses, dance a new dance with the masculine, one of power coupled with grace, seduction with wisdom and knowledge with nurturing giving birth to a new world